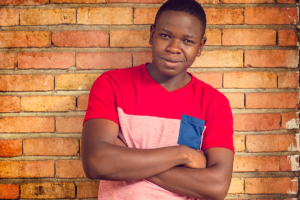 Having grown up in Lusaka, Zambia, Julius moved to Ndola in order to attend Northrise University.  It took some time to adjust to moving to an unfamiliar city and becoming part of a new community made up of people of different cultures and backgrounds.  Julius was encouraged by his father and friends to become involved in clubs and activities at Northrise.  His involvement at Northrise on a leadership level has allowed him to grow spiritually, personally, and academically.  His involvement in the Peer Leadership class has been especially important to him and has attributed to his growth.  One particularly meaningful Peer Leadership class that focused on fear allowed Julius to see how fear was controlling certain aspects of his life.  After the session he gained the strength to confront his fears and felt a weight lifted off his shoulders.  Another meaningful experience was his involvement in the First Year Experience Club, which allowed him to interact and make new friends with first semester students.  He was able to learn from these students while ensuring they felt part of the growing family that is Northrise.  Julius describes Northrise as having a welcoming nature saying, “It is almost next to impossible to feel lonely or left out in these various school activities.”  Julius also enjoys weekly Chapel.  He has chosen to be a Chapel Assistant because he feels serving God is a great honor.

Julius is eagerly anticipating studying at Dordt College and believes it will open many doors and create opportunities.  Julius has an intense desire to serve his country and make it a place where future generations will be proud to live.   Having high expectations of himself and clear academic goals, he wishes “to attain a degree in the field of Agriculture that will allow him to have a direct impact on people in his community and to serve a great need.

Julius hopes to encourage others to dream big dreams, work hard, and pursue educational goals.  There is a beautiful saying in Africa, “Educate one child and you empower the whole community.”  He believes he is one more empowered individual who can impact his community and help change the nation.  He realizes that change starts from within and he wants to be a person who promotes change.  Studying at Dordt will create new opportunities for many people who are interested in agriculture and as a result, the country will be better for it.

When Julius was first told of the scholarship and opportunity to study at Dordt College, he did not feel ready to make such a big decision that would take his life in a completely different direction.  He committed to praying about the opportunity and realized that Northrise prepares students for the future, whatever that may be.  He realized he was ready and prepared!  “I know this is great opportunity and I didn’t want to take the decision lightly because of this. This opportunity means everything to me and my family. The chance to study abroad to meet and learn from people with a different background from me and to represent my country is a great honor. I don’t think words can be enough to explain how excited and humbled I am to have been given this opportunity and all I can do is praise God.”