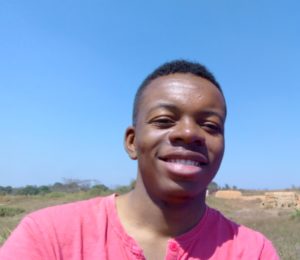 Kanema was born and raised in Lusaka, Zambia.  His family, consisting of his parents and two brothers, moved often but spent a substantial amount of time in a home that was formerly a chicken-run.  He describes his humble upbringing saying, “We did not have much except for God and each other.”  He states that in the midst of hardship, his parents emphasized the importance of education to their children, which instilled a genuine love for learning and knowledge.  As a Christian, Kanema was drawn to Northrise University because of shared Christian values and beliefs.  He personally believes there is no true success without God.

Kanema has big dreams and goals for his future, as well as for the future of Zambia.  He desires to see his nation reach its full potential.  He hopes for a day when Zambians begin believing in the infinite possibilities they possess.  He longs for a united Zambia that sees beyond tribe and race.  He desires change in the nation of Zambia, but he is already part of the change that is occurring because he realizes the need for change.  He wants to be able to influence others and share the need for transformation because Kanema knows that you cannot solve a problem if you do not even know the problem exists.

Attending Dordt College will provide an opportunity for Kanema to pursue his passion and calling, which is Civil Engineering.  “It’s also a chance for me to diversify and enlarge my worldview, become more independent and generally grow as an individual and that’s why am taking this opportunity.”  To Kanema, the opportunity to study at Dordt College is about more than earning qualifications.  “To me it’s living proof that despite your background, your financial status, despite what people say, despite being looked down upon and never having much in life, God still has a divine purpose for everyone.  We only see it come to actuality if we hold on long enough with faith in Him.  Though this only marks the beginning, sitting here today I can safely say I am seeing my divine purpose take root.”  His family members and friends are encouraged and inspired.  His brother is now constantly sharing his own dreams, as this opportunity has made him believe that that anything is possible.  Kanema knows that God has a plan for his life.  He is thankful for the Lord for granting him this opportunity and is also grateful for Northrise University and its partners for making this dream a reality.