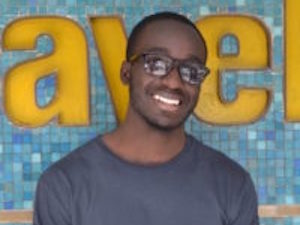 “It’s been a long time coming,” says Nkole regarding his impending graduation. “After four years of studies, this is a significant step towards achieving my dreams,” he continues, “a good job to start with, then running my own business afterwards.”

About to be awarded a Bachelor of Business Administration degree, Nkole Champalama looks back at his journey at Northrise with pride and to the future with great optimism. After completing his studies in November 2015, he joined FINCA, a responsible finance company, as an intern for three months. Speaking of this recent internship, Nkole says, “It was a learning curve of industry realities; its ups and downs. I have gained people skills and learned how to be both humble and professional.” Nkole reckons NU prepared him adequately to adjust to what the world out there has to offer. In just three words, Nkole describes the Northrise experience as; extraordinarily unexpected fun! On top of a BBA degree, Nkole is going away from NU with great friendships, connections with people who inspire him, a changed perspective on life and beyond-the-classroom street-smart skills to navigate through life. “Through Bible studies with friends, class devotions and Chapel,” Nkole says, “I have learned to be humble, gained positive influence and spiritual growth.” And of the financial help he received at Northrise, Nkole offers this gratitude, “I am thankful for financial aid; it came in handy where my guardians struggled and it has helped me a great deal in achieving my degree. The extra push it provided is the reason I am here, about to graduate.”

The ultimate goal for Nkole is to be able to run his own business. Together with a group of university friends, he has been dreaming and talking about ending up in consultancy business. But the hope is that the path to business ownership will involve an opportunity to work as a CEO of a big company. Nkole’s immediate preoccupation after graduation is to find a job, as a starting point. While he is keeping an open-minded approach to his job search, investment banking and economic development are his preferred sectors. Although the idea is in the backburner for now, he is thinking about progressing to a master’s degree in the future when his financial standing is more stable. In the meantime, being off school is allowing Nkole to pursue other interests such as abstract art and I.T whilst job hunting.

In terms of how he hopes a BBA degree will help him impact others, Nkole feels confident that by virtue of his achievements, others, especially within the extended family, will also get encouraged to pursue higher education. He is also sure that the Christian ethics acquired from Northrise’s Christocentric education will be positively influential in the places where he will work.