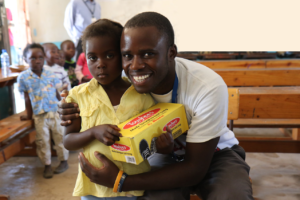 In 2008, Peter Lungu received the news he and his mother were praying for. He had been accepted to Northrise University in Ndola, Zambia, and was granted a scholarship that would make it financially possible for him to achieve his dream of going to university.

Peter left his home in the capital city of Lusaka and began his studies at Northrise. Away from home for the first time, and anxious about how he would fit in, he immediately felt encouraged and reassured by Dr. Moffat Zimba’s message to the new students, “You are Northrise.” It was immediately unifying and uplifting, helping Peter to feel he was a part of something bigger — and he was in a place where he was valued.

At the time, there were no dorms available and Peter’s only housing option was a ramshackle boarding house that also served as a chicken farm, with dangerous, exposed electrical wiring running throughout. A new dorm was being built on campus and Peter joined his fellow students in praying for the dorms completion. While he wasn’t sure if he would ever have the chance to live there, Dr. Zimba’s words echoed in his ears, “YOU are Northrise.” He wanted the best for the school community. Peter was overjoyed when Dr. Zimba offered him the role of resident assistant in the new dorm and he was able to live in the beautiful, new building. Looking back, Peter sees how God was putting the pieces together for his future at Northrise.

Peter sees Northrise not just as a school that teaches academics and awards diplomas, but as a ministry, that develops the whole being. From his Christian faith to his personal values, Peter says that Northrise shaped him into someone he wouldn’t have been if he hadn’t made the decision to attend, and he is grateful that someone far away made an investment in the scholarship program that gave him the chance to succeed.

Even as he received his degree and planned to return home to seek employment, Peter’s time at Northrise wasn’t finished. He was asked to interview for a position with the school.

“I think it was God answering my prayer,” says Peter.

Peter has served in various roles on the Northrise staff since 2012, including Student Life Associate and Student Records Manager. He currently works as Registrar, maintaining accurate academic records and helping students successfully complete their course of study. In addition, he is pursuing a Master’s in Business Administration.

As Peter says, “There’s a life that has been changed. I am a living testimony of your support.”